While in the Kansas City area with my daughter and granddaughter, I returned to the Ray County Museum in Richmond, Missouri, at the invitation of the wonderful people there who gave me so much help researching my book about Martha Maupin. Four years ago I visited this museum and genealogical library, where we looked for material about my Maupin ancestors in Ray County.

Recalling the delightful days we spent together on the project, Jenne Sue Layman introduced me to a welcoming crowd at their monthly genealogical group meeting.

Jenne is one of three ladies who worked with me in Ray County, and this time I finally got them together for a picture, out in front of the big old brick building that houses the museum, as well as the genealogical library. The old building, which was once the county poor farm, is on the National Register of Historic Places. 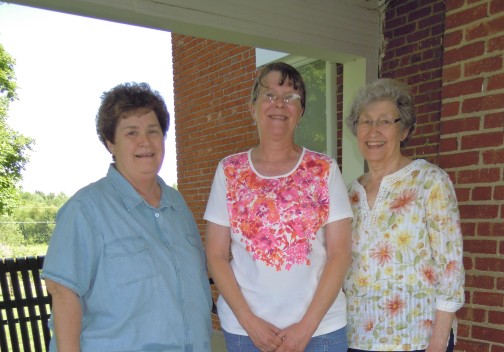 During my earlier visit here in 2010 the most thrilling item they found for me was an 1839 ledger for Isaiah Mansur’s store that showed lists of items sold and people who bought them. I was thrilled to thumb through the frayed, age-darkened pages and find many listings for various Maupins.

I was pleased to see some more familiar faces at this Saturday event. Glen Hill Jr., who helped me with research in next-door Carroll County was there. Glen came to the event at River Reader Bookstore last weekend, and returned for this one. 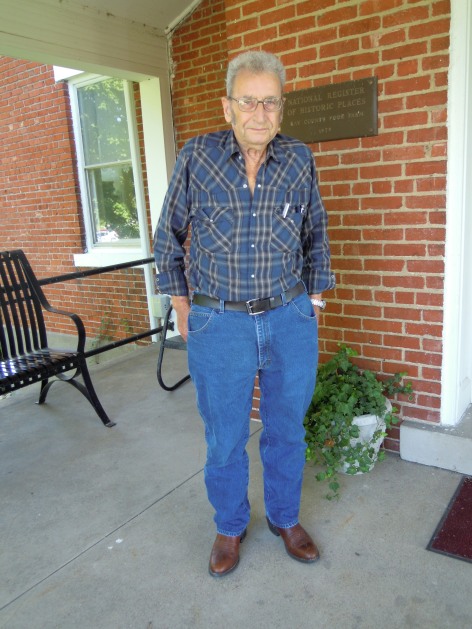 Also, quite a few members of the Frazer family came. The Frazers now own the property once owned by Garrett Maupin’s father, Perry.

In fact, I made a small discovery on that 2010 visit when researching land documents in the Ray County Courthouse to see what happened to Perry’s property after he died. The property was divided among Perry’s wife Rachel and their children because Perry didn’t have a will. All the old deeds are written by hand in the florid style of the day. Between that and the legalese, I struggled to follow what had happened, but ultimately all the Maupins appeared to be selling their property to a John Wollard.

The same day I learned this, Jenne took me out to the old Maupin homestead to meet David and Marilyn Frazer. They told me the place had been in their family a long time. When I asked if it was a Century Farm they told me their family had owned it much longer than a century—since their ancestor John Wollard bought it. I knew that name, having seen it so many times that morning.

“Oh, my goodness,” I said. “Do you know who John Wollard bought the place from? He bought it from my ancestors, the Maupins.” So we had a link.

And on Saturday not only David and Marilyn Frazer came to the meeting, but their son and his wife, and two other family members. 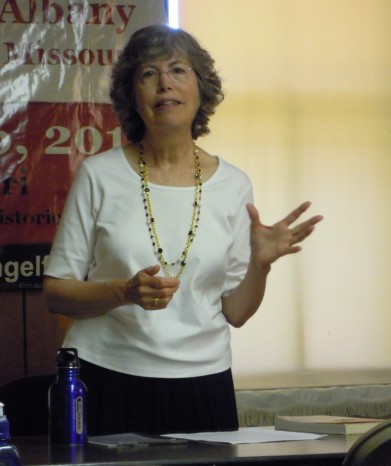 At Jenne’s request I talked to the group about my search for my ancestor Martha for the book I wrote about her, A Place of Her Own: The Legacy of Oregon Pioneer Martha Poindexter Maupin.

Afterward we enjoyed a terrific spread of food provided by Carol Proffitt. The members take turns, and this was Carol’s day. It was a good day to be there.

All in all a lovely day.

2 thoughts on “Back to Missouri Roots”

And the more we dare to try out new paths, like all explorers of new territory, the more we open up further paths that make it possible for us to experience life in ways we never thought possible.
–Riane Eisler, author of The Chalice and the Blade, quoted from Sacred Pleasure