Day Five ~ Back to the Beginning

The land was mostly dry and dusty. . . . The Platte River making its lazy way between sandy bluffs, curving along a wide swath of bottomland. The shallow stream could sometimes be as much as two miles wide and a few inches deep. . . . Islands and sandbars, quicksand. Muddy, warm.
They were finally on their way. . . . The weight of troubles slipped from her shoulders as she looked west toward a new land and new possibilities. . . .
—A Place of Her Own: The Legacy of Oregon Pioneer Martha Poindexter Maupin, Janet Fisher. (Guilford, CT, Helena, MT: TwoDot/Globe Pequot Press, 2014), pp. 109-110, 104.

Saturday, May 25. Still traveling up the Platte. The road is a little monotonous. The scenery does not change much. The river has a winding course and contains many islands. Some are little more than sand bars, others are covered with low willows. The road is at times along the river bank, and again near the bluffs on our left.
—The diary of Margaret A. Frink, in Covered Wagon Women: Diaries and Letters from the Western Trails, 1840-1890. Vol. 2, 1850, Kenneth L. Holmes, ed. (Glendale, CA: The Arthur H. Clark Co., 1990), p. 89.

Took up camp after dinner & started up the Platte. . . . The road is level being between the bluffs & the river. The Bluffs are very high & picturesque. The river ranks among the first class as to width but is very shallow as indicated by the many islands with which it is filled.
—The diary of Celinda Hines, in Covered Wagon Women: Diaries and Letters from the Western Trails, 1840-1890. Vol. 6, 1853-1854, Kenneth L. Holmes, ed. (Glendale, CA: The Arthur H. Clark Co., 1986), p. 89.

May 10th [at St. Joseph] Crossed the [Missouri] river without any difficulty . . . The surrounding scenery is delightful The soil is fertile and lacks nothing but improvement to make it one of the first places in the world in agriculture;; My sister and I ascended to the summit of a hill and with the aid of a spy-glass took a farewell view of St. Joe. and the United States.:
—The diary of Abigail Jane Scott, in Covered Wagon Women: Diaries and Letters from the Western Trails, 1840-1890. Vol. 5, 1852, The Oregon Trail, Kenneth L. Holmes and David C. Duniway, eds. (Glendale, CA: The Arthur H. Clark Co., 1986), p. 49.

I could not begin to tell you how many their [are] in St Joseph that are going to Oregon and California but thousands of them it is a sight to se the tents and wagons on the banks of the river and through the country
—The diary of Mary M. Colby, in Covered Wagon Women: Diaries and Letters from the Western Trails, 1840-1890. Vol. 2, 1850, Kenneth L. Holmes, ed. (Glendale, CA: The Arthur H. Clark Co., 1990), p. 48. 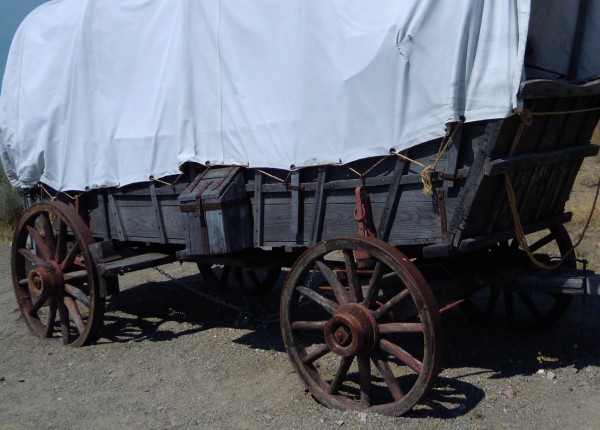 By Day Five we had to push forward without delay. We followed the trail a ways, along the main fork of the Platte River, lush and green now with farming, bluffs on either side. You can tell where the river is by the line of trees that marks it.

Martha wouldn’t recognize this any more than she could have recognized the land along the North Platte. She would have remembered a much drier place with fewer trees, and those often limited to the islands of the wide, meandering waterway.

Pushing eastward into the tall grass country, we saw more farms where Martha would recall prairie grasses that could grow six feet tall, and flowers in swashes of color reaching into an arc of blue sky. 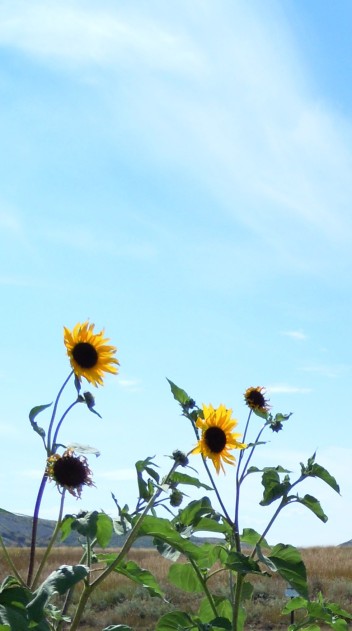 The native North American prairies west of Missouri changed gradually going westerly—from tall grass to mixed grass to the short grass of the high desert. From the diaries it sounded as if the tall grass had pretty well played out by Fort Kearney, soon after they reached the Platte. Somewhere in there you begin reading about lack of wood and the need for that substitute fuel offered by the buffalo that ranged across the region—buffalo chips. Different companies of wagons spread out so their livestock wouldn’t overgraze along a single track, here where the land stretched wide enough so they could.

I didn’t take any pictures on Day Five, maybe because the landscape seemed monotonous, mostly flat, green, looking nothing like the place described in the diaries. A monotony of a different kind. As we continued eastward the flat land spread farther to the horizon so the bluffs on each side sometimes disappeared in the distance. And a gradual greening occurred the farther east we drove—probably as that earlier vegetation once changed from shorter mixed grasses to the tall prairie grass, going the opposite direction the emigrants were.

The Weston plow, invented in the late 1850s, changed this landscape. Before the Weston, no plow could cut through the tough root system of the tall grasses. But this new plow had the power to turn the turf over. Farming was born in the tall grass prairie. A few industrious souls today are trying to return portions of this land back to its native state, but they have strong competition from agribusiness.

We left the trail around Kearney for the shortest route to our destination, finally reaching the Missouri River and St. Joseph, one of the popular jumping-off places for emigrants embarking upon the Oregon Trail.

Folks couldn’t just march west when they had a mind to. They faced a small window of time when it was advisable to go—to jump off into the wilderness and one of the most profound adventures of their lives. They had to wait until the prairies greened up in the spring to offer feed for their livestock, and they had to cross the last mountain before the winter snows. Towns like St. Joe, Independence, and Westport (which became Kansas City) grew up where people waited, and businessmen set up shops to offer supplies in case folks still needed goods. Business could be brisk while folks waited and shored up the wagons.

Reading the diaries you feel the gradual shift as the bright hope at the outset begins to fade. Exclamations of “beautiful scenery” and “good roads” turn to words like “tedious” and “monotonous.” The good roads turn dusty. The lush grass becomes scanty. The way ahead feels longer, less certain. I am reminded of Joseph Campbell’s heroic journey. Isn’t that the way of every major endeavor? We leave the familiar because something compels us. And if we knew in the beginning how hard the road would be, we might never have the courage to go. Hope compels us, and though things get rough in the middle, we come out on the other side, having triumphed or at least having learned something.

Nearing the end of our journey we decided to stop in St. Joe for dinner. We were so ready for a decent meal. Our own struggles paled in comparison to those of the intrepid pioneers, but we were anxious for a few of the comforts.

Christiane had hoped to arrive at her house before dark, having rented the place sight unseen, except for pictures.

Maybe with a quick meal we could have made it, but our desire for something better outweighed her plan. We enjoyed a delicious sit-down dinner and reached Kansas City in the dark.

The map of freeways and streets looked as if a drunken spider had gone on a spree and built a crazy web. It took careful watching for signs, but our directions led us right to the house, and we were pleased to see the canopy of large trees in the neighborhood. When we stopped in the driveway and opened the car doors, a strange sound reverberated around us. It seemed almost like an electronic buzz and I wanted whoever was doing it to turn off the music or machine or whatever was making that noise. We were so exhausted we just wanted to go in and make our beds on the floor—to sleep and await the moving pod and real beds the next day. But what was that sound?

We learned there were huge cicadas, and maybe some tree frogs adding to the chorus, and over time we began to get used to them. We could barely hear them inside the house with doors and windows closed. So they didn’t keep us awake. They did make our chirpy critters back home seem like soft crooners.

So our journey ended near where Martha’s started. She began with hopes high, marching out onto the wild prairie. We entered the city—one of those jumping-off places—tracking a wild network of freeways in the dark. But we shared her sense of hope for new adventures and possibilities.