In the third outtake from Martha’s story, A Place of Her Own, the scene takes place at the end of Chapter 5, “Home and War,” showing Martha’s visit back in Illinois with her parents. It’s the good-bye scene with the parents, which I found had many similarities with the greeting scene for that visit, the wording so alike I was struggling to show the difference, then realized I could simply summarize the scene at the beginning of the next chapter and cut 559 more words. And no more struggling over pesky words that wouldn’t come together for me. So, clip….. 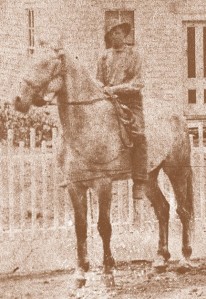 The horse and rider at right will look familiar to folks who’ve seen the book jacket of A Place of Her Own. I pulled this out of the old photo on the cover. It shows Martha and Garrett’s eldest son Cap outside Martha’s house at the farm, and I put it here to reflect an image. In my research I found no photo of Garrett, although military records and family legend describe him well enough that I can easily imagine him resembling Cap. And both men were known to be excellent horsemen. As Martha rides away with Garrett in the scene below, I draw from this image to envision him.

Garrett could not be held back more than a day and Martha had to face the wrenching pain of separation again, this time with her family, who’d grown even more dear to her during this visit. After tearful good-byes all around to her siblings and their families, she walked with Garrett down the little trail to the small cabin in back, holding Nora tight in her arms.

When Ma opened the door, Martha smiled, wishing for a smile in return and seeing only a flicker. “We have to go now, Ma.” Her mother wouldn’t quite look at her, wouldn’t reveal either warmth or coldness in her clear gray eyes.

“Mam-ma,” Nora said, waving her arms, and Ma reached out to take the child, holding her close and nuzzling the feathery blond hair. Ma took the child to Pa, who was sitting on the bed, and let him hold her.

“How’s my girl,” he said, pulling a handkerchief from his pants pocket to wipe the corner of his eye.

When he looked up at Martha, she sought the flash of warmth she’d seen from time to time, when he seemed to forget how angry he was with her, but like Ma he appeared to be hiding behind a mask, making his face difficult to read. She would have reached down to embrace him, but he held the child as a shield. Finally she took Nora in one arm and patted his shoulder with the other. “Good-bye, Pa.” He looked so weak. Would she ever see him again? But Ma was strong. Maybe another day they’d have time to put their differences behind them.

Garrett spoke up finally, his voice taut. “Good-bye, then.”

Martha gave her ma a one-armed hug, still seeking her eyes, but Ma kept her focus low. For the briefest moment she did look up, and her pain struck Martha. Tears glittered. Martha leaned forward to press a cheek against hers, then drew away. “I love you, Ma–and you, Pa. I . . . really have to go now.” Her voice broke on the last words, and she turned away, following Garrett out to where Newt held their horses.

Garrett mounted first and reached for Nora, perching her on the saddle in front of him. “She’ll be safer here.”

Nora’s shriek rent the air. He tried to soothe her, but she reached for her mother, tears washing her bright red face. She wasn’t having a bit of this arrangement. “I’d better take her with me,” Martha said.

Garrett’s jaw tightened, but he waited for Newt to help Martha onto her sidesaddle, then handed the screaming child to her. Martha did her best to tuck the child on the saddle in front of her. This was going to be a long ride.

They bid Newt good-bye, waved to the others waiting on the porch, and rode out, Nora still shaking with soft sobs. Martha could scarcely contain her own emotions. With every step the horse took, she was moving farther and farther from her beloved family. She looked back once, and blinked at the tears. Would she ever see them again? Ever heal the breach with her beloved ma and pa? Or had time ended all chance of that? She turned and glanced at Garrett, then Nora, ahead to her future, and didn’t want to answer those questions.