Continuing the Outtakes of words cut from A Place of Her Own before publication, we come to this short segment, which is an extension of the Oregon Trail scene that ends at the upper third of page 115. Martha knows she’s pregnant by this time, but she isn’t sure Garrett knows. Although I kept a few of these words, I clipped this description of lowering a wagon down a steep hill because there’s another more powerful scene of lowering a wagon down the longer, steeper Laurel Hill on pages 121-122. Also, before visiting the site I didn’t have a clear picture of the setting in mind and decided I’d better leave the scene out. More words cut. Word count dropping, dropping. Clip…..

Windlass Hill, the site of this scene, may not look so high or so steep, unless you think of getting a covered wagon down it. I took this photo on our 2014 family trip backtracking the Oregon Trail following the release of the book.

The higher [Martha] climbed, the more she could see the incredible landscape around them. . . . Garrett caught up with her just as she reached the top, and she stood aside to let him lead. He didn’t say anything. He said little these days that didn’t have to be said, as if the words might drain his energy and he had to save it all for the daily ordeals. She felt something of that herself. She could scarcely catch breath to breathe, let alone use it to talk.

She plodded after him across the high tableland, until the beaten wagon tracks seemed to lead right off into the sky ahead. Garrett stopped the wagon at the edge of the rim, and she hurried to his side. Her heart lunged when she looked down. The land dropped away in front of them in a long, steep bank. Surely he didn’t plan to go down here. But wide scraped tracks led right down the slope to a tree-filled hollow at the bottom.

Garrett unhitched the oxen and began to tie heavy ropes around the wagon’s axles. Larry brought her the children and went to help him. They locked the back wheels by sticking a pole through the spokes from one wheel to the other. Newt held the oxen until Garrett looped the ropes around their yokes. Then with the oxen behind, holding the wagon from falling, the men slowly let out the rope and lowered the cloth-topped vessel down the sandy incline. Martha didn’t think she breathed once until it settled, rocking a little, on the valley floor. But she must have.

“Let’s get down and get on our way,” Garrett said.

“Help us with the girls first,” Garrett said, “and lead the oxen down. I’d better give Martha a hand.”

When he reached toward her, she took his hand, thankful for his firm grip as they scrambled down the bluff. Did he know the treasure she held inside her? She hadn’t spoken of it yet. Could he tell? If he’d marked the days and noticed her lack of monthlies, maybe he knew. But he hadn’t touched her in that way for so long, how would he? Every night they fell into bed exhausted. Maybe he remembered from before. Maybe he read it in her, the way he read other things of nature.

As soon as he had the oxen hitched again and heard the boys bringing the cattle, he started out once more. Martha had thought they might rest awhile in the pretty hollow, but they had a few hours of daylight. With the girls back in the wagon, she started after him, every step sending up a wave of pain, from her feet feeling every rock through the thinning soles of her boots, up into her ankles and knees. 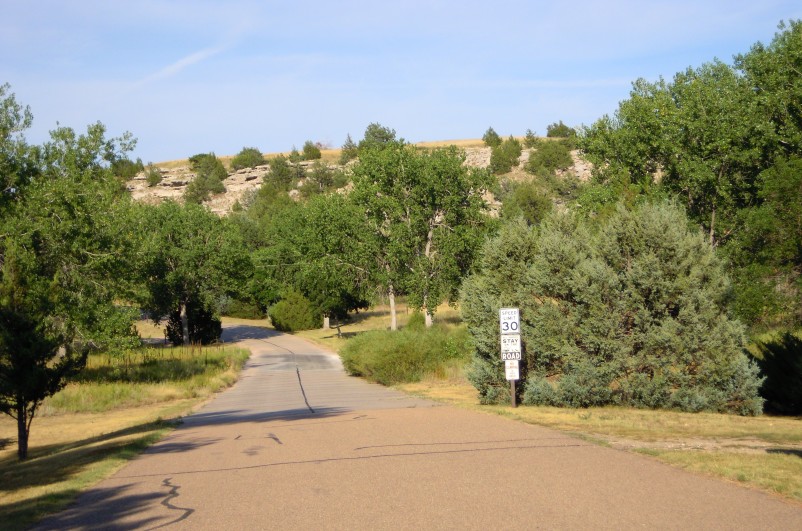 Ash Hollow lay near Windlass Hill, but farther than I imagined when I wrote the scene, and clearly a more rugged drop from the high tableland. Water in the lovely Ash Hollow became known as a source of the dreaded cholera that ravaged emigrants trekking west. The Maupins were lucky to be spared this deadly disease.