This Outtake reveals another short bit taken from the end of an Oregon Trail scene at the top of p. 124 in A Place of Her Own. The Maupins have survived the precipitous drop down Laurel Hill and have just come into the rich prairies west of the Cascade foothills. The cut is just 176 words, but words are words. And I desperately needed to take more out. At least it gave me more in one fell swoop than the single filler words I snipped throughout the manuscript. Clip…..

The photo above, by Robin Loznak, appears in A Place of Her Own, illustrating Douglas Firs on the family farm. Similar trees of this species would have been growing in the area depicted in this scene, though no doubt larger than these. Pioneers trekking into what is now the State of Oregon found Doug firs some 300 feet tall. Two or three men could lie head-to-foot across the diameter of a stump from one of these giants that might have been as much as 800 years old.

Near evening a cabin appeared, nestled against a grove of firs at the edge of a broad meadow. The scent of a hearth fire reached Martha’s nose, and she took a long, satisfying breath of it. People began spilling out the cabin door, running toward the wayworn travelers. A man reached them first. He lifted his hat and rubbed a hand across his thin, curly hair. “Welcome to Oregon.”

A united but somewhat ragged thank you answered him back.

He introduced himself and his wife, who came up behind him, and Garrett introduced the family. The woman went straight to Martha and gripped both her hands. “My dear, what a journey for you. When are you due?”

The woman smiled and nodded. “Oh, you’ll be settled by then. Come sit a spell and have some supper with us.”

“That’s so nice of you,” Martha said. “You must see a lot of travelers, living here.”

The woman laughed. “We do, and we love it. We all took that trip, God bless us, and we all understand.” 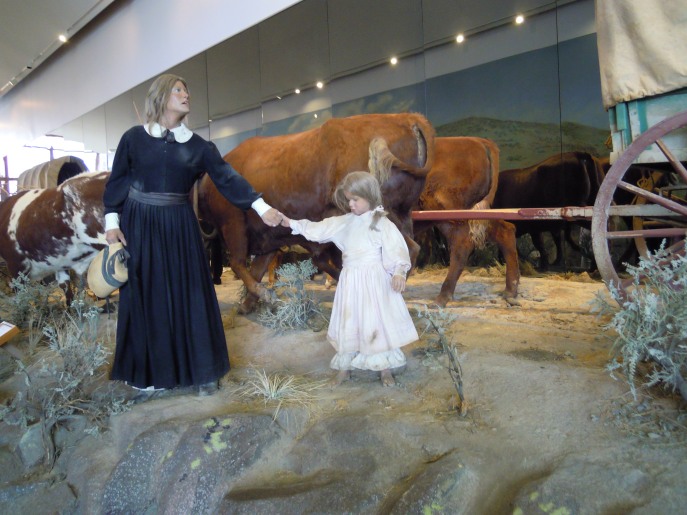 This photo taken at the Interpretive Center in Baker, Oregon, shows a part of the continuing diorama depicting a wagon train on the Oregon Trail. The woman makes me think of Martha and her little Nora, oldest of her two at the time. My heart tightens as I imagine the strain of traveling that perilous trail with such a precious, vulnerable child. Another even tinier. A third on the way. What a thrill to know in this short Outtake that they have almost made it through. Of course, Martha would have been full in her pregnancy by then.