I woke up today ready to start the rough draft of Book Five in the Golden Isles Series, having completed the comprehensive outline at about 10 pm Sunday night and taken a day off to do the mundane so I could charge ahead without too much interruption. Now, I can dilly dally as well as anyone when it comes to starting a project of that magnitude, Procrastination being the flip side of my old friend Perseverance. Nothing harder in writing a book than that first blank page. So, there’s no end of things you can think of that need doing. Cleaning the office. Checking a few scenes from the last book and getting caught up in the story. An extra scrub on the kitchen counters.

Now, I’m not Robin Loznak when it comes to taking a photo, and my camera won’t do what his will, but I hope you’ll forgive the less-than-crystal-clear shots when you consider my excitement. The above photo is taken through glass, my kitchen window, no less. They’re right outside my fence. That’s a bull on the left. You can just make out the antlers. The cow caught sight of me even through the window, and they don’t stay long if you spook them.

So when these wandered on I kept behind glass awhile, just for the joy of seeing them. And doing my best to record what I saw.

The photo above is still through glass. And I might add in my defense, the fog was drifting. They’re enjoying the pond and the green grass nearby. 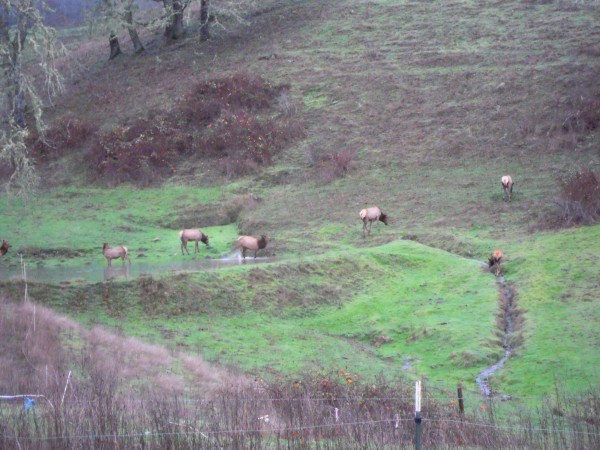 The center cow above is getting a kick out of it. See her right back leg kicking up the water? They romped around in the pond for a while, but the real action shots are too fuzzy to make out. The antics were fun to watch. Elk seem to have a sense of play, even the old ones. Once last year I saw three big bulls in this pond. I wasn’t sure if they were fighting or playing. But they would dip in the water, shake their antlers hard, and then rush each other. Great entertainment!

After enjoying the show and procrastinating for a considerable length of time I finally dared venture outside, knowing that even if I scared them away I had gotten my money’s worth. I took the above shot from just outside my front door. And I was reminded of another wild critter I saw last summer. I had just glanced up the road from inside when a golden-brown critter waltzed down that road above the turn where tall grass blocked my view of all but its back. My first thought was deer, commonplace visitors. But it occurred to me that the animal seemed low to the ground. Was the grass that tall? It meandered around the turn and I saw its legs. Short legs. It turned and went off the road so I could see its tail. Long tail. Oh my! A cougar, about 100 yards outside my front door. I had been planning a walk up that road. I changed my mind and didn’t go just then.

But I don’t worry about elk–usually. There was a time I wondered if I was being challenged, but that’s a story for another day. These didn’t challenge, and they didn’t run. I went back inside and watched until they strolled on.

I did get started on the book. Nine pages, about 2,700 words. Not a shabby start. Not the best either. But with such great visitors, how can you not procrastinate a little?