The annual Mid-Valley Willamette Writers Author Celebration happens next week when several members are selected to read from their published works. I’m excited to be one of the readers again. At this year’s event I’ll be reading from my new historical novel, The Shifting Winds.

Pulling up some pleasant memories, here’s the group that read in 2014 at the first of these gala events. That time I read from A Place of Her Own, which had just been released. 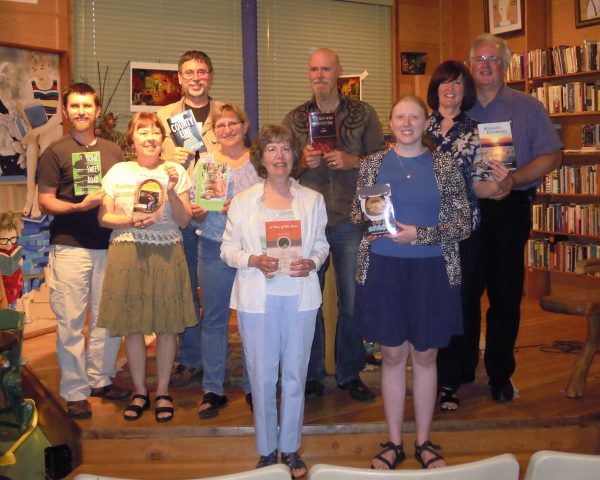 What a fun evening! It was so exciting to be sharing my very first published book. A great time for us all. I developed some lasting friendships from that gathering. We were at Tsunami Books in Eugene, the regular meeting place for the Mid-Valley Willamette Writers, and the gala will be at the same place this year.

Here’s the poster for the event, at left.

It’s the first Thursday of the month, the usual meeting night for the group, June 2, from 7 to 9 pm.

As noted on the poster it’s open to the public. The suggested donation is one new or gently used children’s book or a small cash donation in support of the group’s Books for Kids program. Tsunami Books is at 2585 Willamette Street in Eugene.

I’ll be reading the opening scene from The Shifting Winds and introducing one of the real historic characters from my book, Joe Meek, mountain man extraordinaire.

Here he is at right, portrayed in his immortal role at the gathering of settlers at Champoeg in May 1843, just 173 years ago this month.

American settlers were hoping to get an agreement that would give them the protection of law in this isolated frontier.

When the vote seemed uncertain, the bold mountaineer called out in his booming voice, “Who’s fer a divide?” And the voters lined up to be counted.

This large mural is displayed in the Oregon State Capitol building. That’s Joe in the red shirt toward the front, rifle in hand, calling for the divide.

He was a storyteller at heart, which I guess all of us authors must be too. I look forward to hearing readings from the stories of my fellow Mid-Valley Willamette Writers authors and look forward to sharing my own.