Nestled on the bank of Oregon’s Umpqua River, this replica of the British Hudson’s Bay Company’s Fort Umpqua will come to life in a couple of weeks for the annual Fort Umpqua Days celebration at Elkton. The event will run all day Saturday and Sunday, September 3 and 4, and I’ll have a booth there to sell my books. 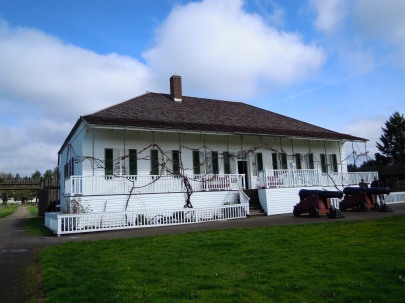 Just last month I stepped into the historic past of the Hudson’s Bay Company’s western headquarters at Fort Vancouver on the Columbia River, touring the commander’s house, shown at left, among other structures there. So I see this Umpqua outpost with new perspective.

I’ve attended Fort Umpqua Days celebrations every year since I returned to the family farm near Elkton in 2009, joined the writing team for the event’s pageants, and had a booth the last two years there to sell my first book A Place of Her Own. Still, I feel a difference this year after my event at Fort Vancouver in July where I presented my new book The Shifting Winds, which has many scenes at that HBC headquarters.

Before the Fort Vancouver event I wrote a series of posts for this blog called “The TRUE Shifting Winds,” giving an overview of history leading to the days of my book and the fort’s part in it. Fort Umpqua doesn’t appear in the story, but for me the enhanced sense of Hudson’s Bay Company history wraps Fort Umpqua into the fold.

Dr. John McLoughlin, shown at right, commanded the efforts of the British HBC fur trading empire in the Oregon Country and had been at Fort Vancouver only a year or so when he decided to push south through the Umpqua basin with brigades of trappers.

Those expeditions into the southern region became annual events–and rather colorful. Author John A. Hussey quotes Editor Alice Bay Maloney in describing them:

At the head of the brigade rode the leader, a chief trader [or clerk] of the Hudson’s Bay Company, astride a strong limbed Nez Perce horse and armed to the teeth with the best weapons of the day. Directly behind him rode his Indian wife gaily attired in the finest London broadcloth, with a wide-brimmed, feather-trimmed hat atop her wealth of long, shining black hair…. All the men were clad in deerskin….

Hussey adds a description of the brigade by an unnamed priest who wasn’t quite as impressed: “‘The brigade,’ he wrote, ‘is a hideous assemblage of persons of both sexes, devoid of principles and morals,’ and possessed of ‘revolting exteriors.'”

In any case it was during one of these expeditions that members of the brigade selected a site on the Umpqua River they thought would be a good outpost for trade with the local tribes. McLoughlin, concerned about competition from American trappers, wanted to clear the area of beaver and establish a strong foothold. 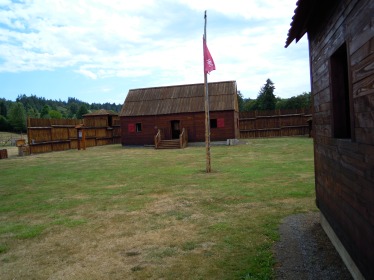 The Hudson’s Bay Company built Fort Umpqua in 1836, and it served the Company well for more than a decade, even after the boundary settlement between Britain and the United States gave the land to the U.S. in 1846.

The photo at left shows the interior of the reconstructed Fort Umpqua with the HBC flag flying again.

In the next two weeks I’ll write a few more posts about the Hudson’s Bay Company trade in the Oregon Country and about the reconstruction of their southern outpost as the Fort Umpqua Days celebration nears.