Oregon authors filled the halls of the Oregon Historical Society’s Portland center last weekend, more than 85 of us, and I was thrilled to be there with my new book The Shifting Winds, along with A Place of Her Own. All day at this lovely event I focused on the delight of the moment, not letting a niggling uncertainty mar the holiday cheer. 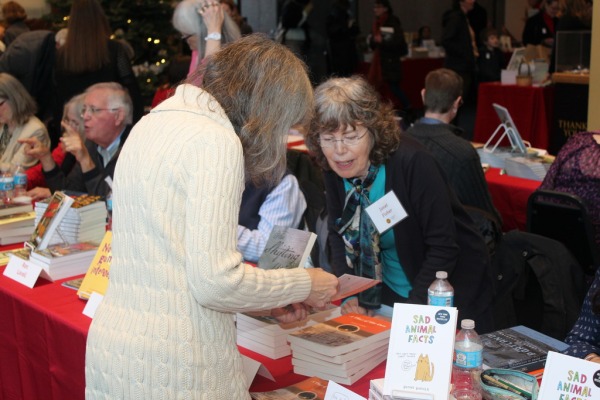 Here I discuss my books with a prospective buyer. In 2014 when I took part in the event with the then new Place of Her Own I was seated downstairs with nonfiction authors. This year, since my new featured book is fiction, I had a place at one of the long tables in the great room looking out at the wintry scene along SW Park Avenue. I think the photo below was taken just as I stepped away from my post so you won’t find me, but the shot offers some perspective on the setup. I sat at the table by the window. 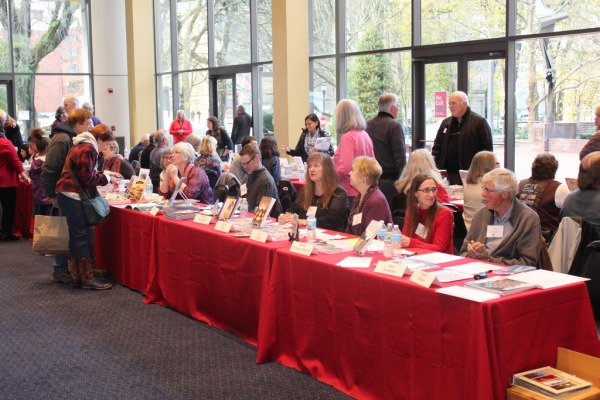 Given the distance from home and the midday start time, I had arranged to drive up on Saturday and stay a couple of nights. The plan made sense when I scheduled my trip to Kansas City for an extended Thanksgiving visit with my daughter and granddaughter. But plans don’t always meet expectations.

A Friday return flight from Kansas City offered the cheapest rate, and I found an itinerary that got me into Eugene, Oregon, by 9:30 in the evening. Not so bad. My other daughter and her husband came to pick me up. However, I wasn’t thinking of the long ride home that took until 11:00 and the bit of laundry between trips that kept me awake until midnight–which was 2:00 in the morning in Kansas City, with my internal clock still telling me I was on Kansas City time.

No worries. I had all morning to sleep in and get repacked. I did want to arrive in Portland before dark. My hotel was familiar to me, but I also recalled it could be a little tricky to find. I woke bright and early Kansas City time. But with one thing and another I did not get away soon enough to arrive in Portland in daylight. I told myself the city would be well lit. And the weather looked agreeable–until I reached the Portland outskirts.

As darkness fell, so did a whiff of rain. The windshield wiper that had been giving me some trouble sounded a little sketchy. I didn’t see the off ramp Google maps recommended, and I didn’t want to end up at the zoo. I’ve done that before. Ready for a good rest, I needed off the freeway. When I saw a sign for 6th Avenue, I went for it. I used to live in Portland. I knew I could find my way from 6th.

Up in the Nob Hill area, though, I had trouble seeing signs in the dark. What if I got completely lost up here? About the time that thought crossed my mind, I saw it. My hotel. I checked in and parked, but as I was about to turn off the engine, the left-hand windshield wiper slipped off the windshield with a loud whack, wrapped around, and glommed onto the driver-side door window like the groping arm of tentacled alien. I opened the window and grabbed the thing, which resisted mightily. But by turning the wipers on and off just so, I managed to situate the errant wiper arm back onto the windshield. No time to deal with the issue now.

I had planned a leisurely drive home on Monday. Ah yes! The plan! It’s a three-hour drive. I had plenty of time to deal with the wiper on Monday morning. I proceeded to find a restaurant and had a restorative dinner of Irish lamb stew. 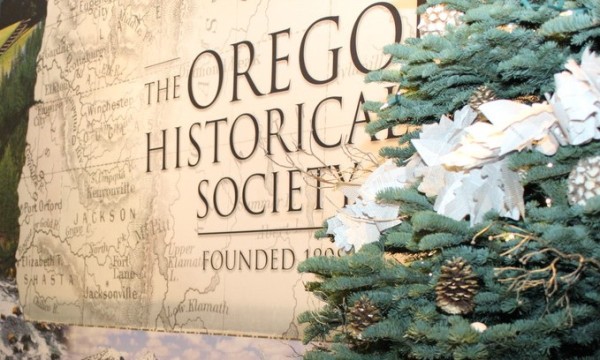 The next day, with all thoughts of windshield wipers neatly tucked into the back of my mind, I walked down the hill to the Holiday Cheer party. A brisk walk. As usual the Oregon Historical Society put on a wonderful event. They start by feeding the authors lunch and giving us time to chat with each other. Throughout the day they offer treats and Christmas carols in the festively decorated building.

At the appointed hour shoppers swept in ready to buy, the kind of buyers who appreciate what great gifts books make. I thoroughly enjoyed chatting with the customers and with the other authors. My publisher friend Laura Stanfill came. We shared a hug and she bought Place of Her Own for her mother.

I sat by mystery author of Jump the Gun and No Gun Intended, Zoe Burke, also a friend of Laura’s. And on the other side Brooke Barker and Boaz Frankel of Sad Animal Facts and It’s Different Every Day calendar fame, a highly successful author-artist couple who wanted to know more about hazelnut growing on my farm.

My friend Billy Cook was there with her new book about a famous author-artist couple of the early 20th century, Drawn Together. Great to see her. That’s Billy in the middle, at right.

The day turned more chilly, but no rain. Maybe the weather would hold.

Then came Monday. A steady drizzle dampened my optimism. How would I find a place to fix my windshield wiper if I couldn’t see out? When I described my problem to the man at the hotel he nodded and said he did understand windshield problems. He carefully marked my map to show me the way. “You can drive there without a windshield wiper,” he said. “You may think you can’t, but I came to work this morning without wipers. You can do it.”

If the man hadn’t told me I could manage without windshield wipers, I don’t think I’d have believed it possible. A steady stream of rain poured down the glass. Occasionally I opened my door window and peered out to check street signs. I found the shop, where a mechanic pressed the wiper arm into place with brute force. “Try it now.”

The wipers moved in perfect synchronicity. How easy was that? As he gave me directions to the freeway, the alien arm slipped the traces again and attacked my door window.

Um. Not so easy. He brought out the tools and tightened a bolt on the wiper. That seemed to work. The wiper stayed on track. I could see. I clenched the steering wheel and drove away.

By the time I reached the freeway, icy rain had turned to snow. Everything in me said, “Go south! Go south!” I needed to get ahead of the storm before snow had a chance to stick. My windshield fogged up as I barreled down the busy highway. I wondered if the wiper would keep going. Maybe I could see through rain. Not snow. So much for my leisurely drive home.

Halfway to Salem the snow turned back to icy rain, and by Albany the rain stopped. The wiper held.

That night, safe in my warm house, I read that a polar bear cub at the Portland zoo had a delightful time playing in the snow. Glad he did. I didn’t enjoy it quite so much. I did get home at a reasonable time–just as planned.