As every writer knows, the rewrite is an integral part of writing. Nobody lays down a perfect manuscript in the first draft. However, there are rewrites, and then there are major rewrites.

If I’ve been a bit absent from social media lately it’s because I was in the throes of one of the majors. And all I have to show for it is a pile of paper. It’s there. And it’s in that laptop. All that work and for now that’s all I can show you. 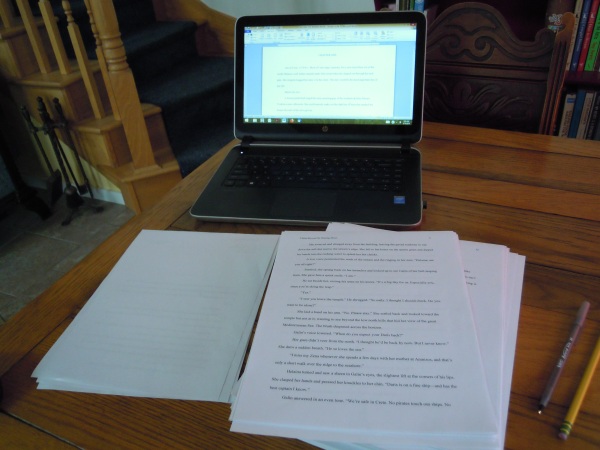 Two months of work, long days. Nothing to show but words. How do I show you the places I’ve been in those two months? The exotic city of an ancient civilization, the sparkling Mediterranean, the craggy mountains of the Greek Isle of Crete. How do I share the joys and fiery passions and torments of people living their lives in the harrowing times I’ve experienced with them? The words.

I could tell you about these people, these places, but until you read the words I don’t want to spoil the story for you. What a pleasure when my critiquers plunge into that story and I can talk to them about the people I’ve been visiting for two months–no, not just visiting. I’ve been living their lives, seeing through their eyes

So what’s different about this rewrite? For starters, I wrote its first incarnation over 20 years ago. And I will say it’s easier to sit down and write a new one than to bring an old one up to speed. I learned a lot as a writer in 20 years.

It’s a book I have declared finished probably a dozen times, maybe more. In its early incarnations I submitted it to agents. I read it in critique groups and open mike sessions. And I revised. While the story grabbed readers it never quite lived up to the excellence it needed. In this time of the Olympic games I would have to say it didn’t quite qualify for the gold. So what could I do?

In recent years this book has become the foundation story of a series–or a couple of trilogies. Having written six of these books now, I have quite a bit of creative energy invested in the project. Because I loved this story I told myself it was as good as the new ones. But was it? It’s so easy to look at something that sounds good and tell yourself it’s all right. So easy, for instance, to accept that this scene should be written this way from the viewpoint of this character. But what if I change viewpoints? What if I add all-new scenes? Is that scene even necessary?

My agent kept nudging me until I finally took a hard look at it and found so much I had left intact from the early incarnations that no longer worked. Once I admitted that to myself, I was ready to make substantial changes.

So there it is. Reborn. It’s all in the words.

The “Going There” blog series describes my book research trip to Europe. The Table of Contents below shows locations presented in the posts. You can click on each entry to navigate the series.