Going There #4: Kiss of the Sea

A volcano long ago ripped through the island of Thera, now commonly called Santorini. It’s a gorgeous Greek Isle just north of Crete and was probably a colony of the ancient Cretans. A line in one of my books expresses a character’s take on the result of that blast.

They sailed into the bay formed by the fierce volcano that tore a hole in the island, where the wash of water had kissed the broken places and turned this into the most beautiful spot she had ever seen. She wanted to feel that healing.

I had visited Santorini in 1995 seeking healing of my own and was deeply touched by the spectacular beauty. I wanted to see it again and explore the gentler coast across from the more famous rim. Now as before I took a ferry from Crete to get the sense of the sea beneath me. 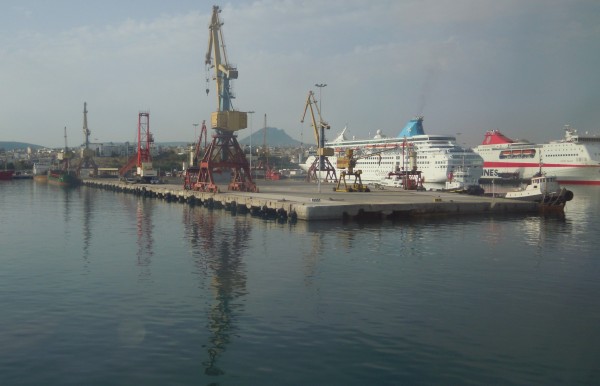 I had only one full day in Santorini, two nights, and had two primary objectives. I wanted to walk across the narrow part of the island to visit the gentler slopes opposite the volcanic rim, and I wanted to see the unusual Santorini grapevines grown in a basketry of branches that shield the vines from Santorini’s brisk winds.

But of course you can’t visit Santorini without taking a moment at the spectacular rim of the caldera filled with the bluest imaginable water of the Mediterranean. Like my character I found this one of the most beautiful places I’d ever seen. 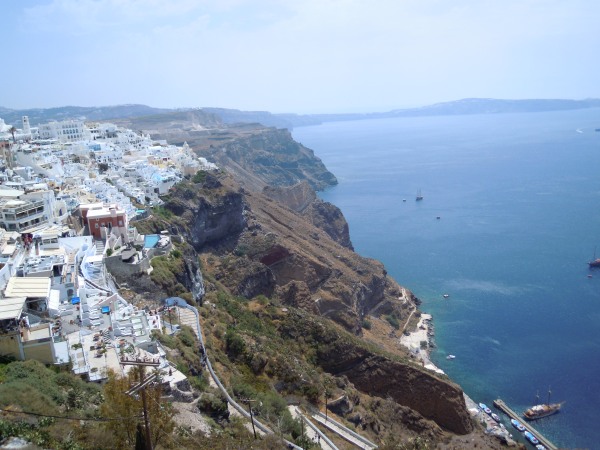 I stayed at the Hotel Thira and Apartments, which overlooked the island’s gentle side, a beautiful spot itself, and I came to enjoy each of the three generations of the family who owned the place. 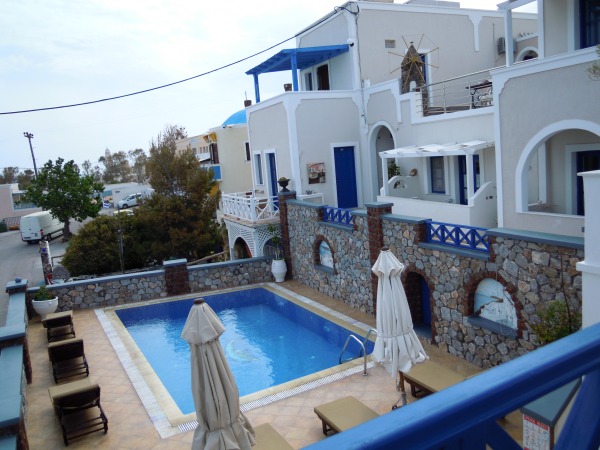 I told the younger woman about my plan to walk across the island from the hotel in the town of Fira near the rim to a restaurant at Exo Gialos on the eastern shore and she assured me it was much too far. Google Maps had it at 2 miles, a 51-minute walk. That didn’t seem too far, but I wasn’t clear on the landmarks or roads, which didn’t always show street names. The route could get much longer if I lost my way. She offered to drive me partway, but I wanted to get the feel of the distance because I had people in my stories walking it and riding up and down the slope on horseback. I wanted to have a sense of that and also find a place for a villa.

I thanked her for her kind offer and sought clear directions. I did have my iPhone and believed I could use the map feature to help me. Together we considered my route and in the morning I set out, planning to have lunch at the Yalos restaurant across the island at Exo Gialos. 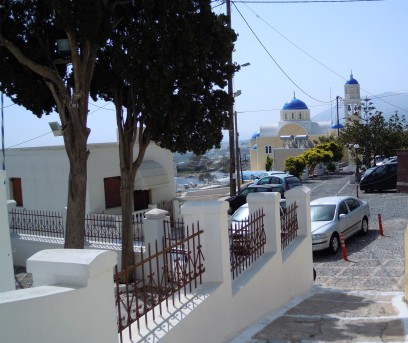 The top of the slope was all city streets of Fira, often little more than cobblestone paths winding down the hill. I watched my progress on the phone’s map feature but soon ran into a maze of walkways and didn’t know how to get out.

I could see downhill to the flatter open land where I wanted to go but I didn’t see any way to get there. I saw a guy on a motorcycle and asked him. He pointed uphill, the way he was going. That seemed counterintuitive but I followed and soon found myself in a busy shopping area. When I asked a storekeeper how to get to Exo Gialos, she shook her head. “It’s too far to walk.” I didn’t argue with that, just asked if she could tell me the way. She pointed. “To the bottom of the street. Turn left. That goes straight to it.”

But the straightaway soon came to a stop against a wall of buildings. Checking the phone map again, I found the name of a hotel that appeared to be on the edge of town the way I wanted to go. I asked a man how to get to that hotel–so I didn’t have to hear again how much too far it was to Exo Gialos–and I followed his simple directions. Once I passed the hotel I came out into the open where a broad road crossed the flatter land with wide sidewalks that would take me right to the intersection I sought. Hopeful, I charged ahead.

I came to a crossing with more than one choice and checked my phone map to see if I had reached the right intersection, and if so, which of the roads to take.

No map. No signal at all. My only guide out here had gone blank.

There was a house at the crossing where I might have asked, but a big sleeping dog lay by the gate. I wasn’t going to wake it. I made a guess and took one of the roads that seemed to lead the right way.

By now it was getting warm and I really needed a bathroom. I knew I was heading toward the sea but unsure I was heading for Exo Gialos and the restaurant. A few houses scattered over the land. The road might just lead to one of those. I saw several people going into an isolated hotel and decided to seek help there. The young woman at the desk was friendly but uncertain of the route. A young man came in and she assured me he would know.

An angel with a beard.

First he asked if I had water. I said yes. Satisfied, he gave clear directions and told me Exo Gialos was 30 minutes away. With some hesitation, I asked if they had a bathroom I could use. He kindly agreed. I was saved. 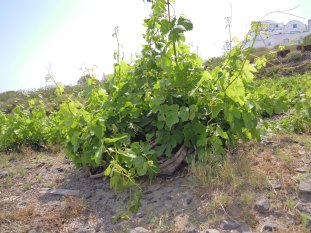 I returned to my trek with high spirits and immediately passed one of the interesting vineyards with the grapevines that had been trained in a circle of branches like baskets, the new growth inside for protection from the wind. Check off one more for the itinerary. 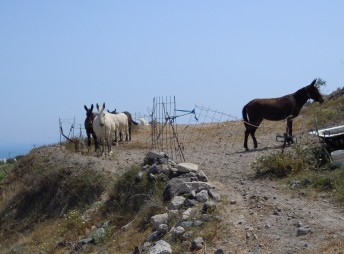 I paused to talk to donkeys, the animals that trek up and down the cliff on the caldera’s rim every day, hauling tourists the old-fashioned way.

Farther down the road I saw a man cutting a huge field of grass with a short-handled scythe. He saw me and stood to watch me for a few moments. By the slump of his shoulders I guessed he was seeking consolation. The heat was turning fierce.

I looked back toward the town of Fira on the rim to see the way I had come, imagining my characters rushing up that hill for the moments that awaited them. I also wondered where I had gotten lost in the maze of Fira’s winding passageways. My trek was taking much longer than Google’s 51 minutes, thanks to those detours. 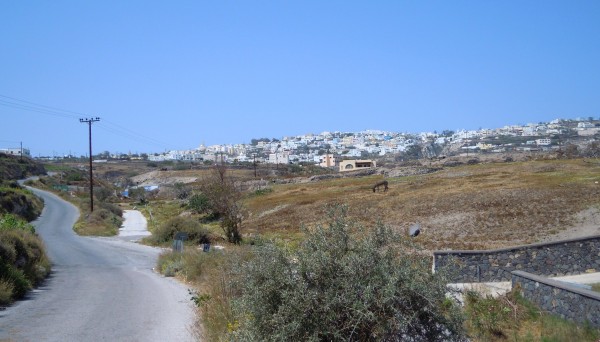 Looking Back to the Rim

I passed possible locations for a villa in my story. I especially liked the one shown below with its overlook to the sea and vineyards and windbreak of trees. The sight of the water gave me hope. Not too far now. 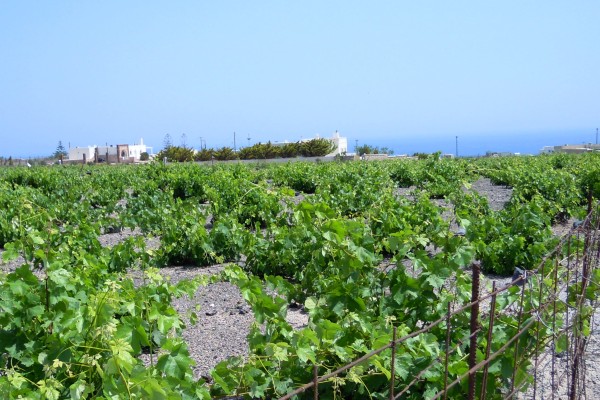 The directions of the bearded angel in the isolated hotel were good–and the signs he mentioned. 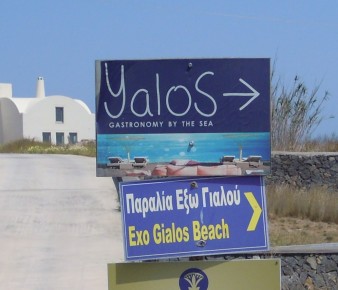 There in print! Signs to my destination. I couldn’t miss it now. And by now I was hungry. I was ready to see that restaurant.

It turned out to be a pleasant place, right on the beach. Music played, the sound becoming one with my thoughts and the wash of the waves. I floated on that sound and rested. For lunch I opted for another Greek salad, this one with a Santorini twist, cherry tomatoes instead of large chunks of tomato, capers instead of Greek olives. Different but good. And of course the wonderful Greek bread. 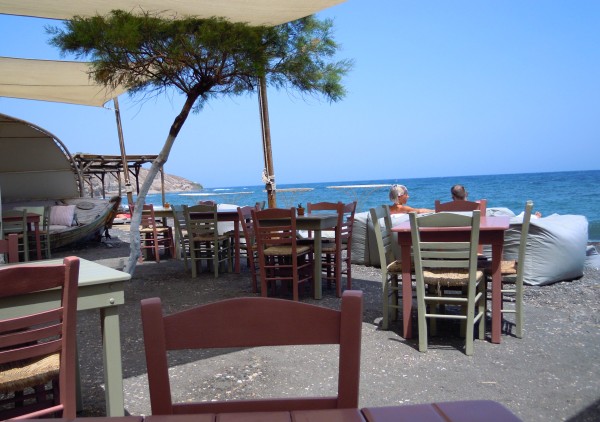 After lunch I walked up the beach. White waves rolled onto the black sand against a remarkable backdrop left by the volcano. Ashen sand created tortured formations and left caves the people now barricade for storage. I have some dramatic scenes here and let myself slip into that world of story. 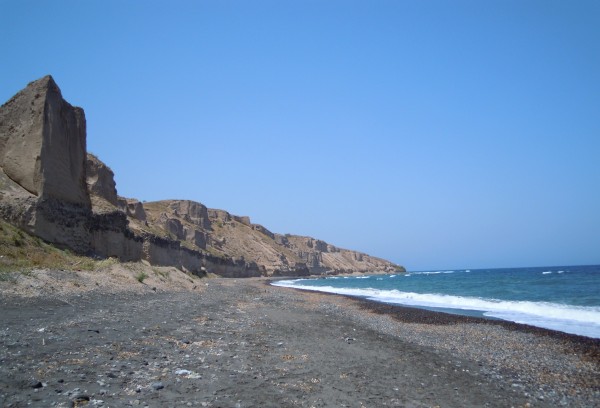 With the heat rising, I took a taxi back to the hotel and saw the way I should have gone. No matter. I made it. I had one night left on this beautiful island and hoped to see one of the famous sunsets. But by the time I went to dinner fierce winds had come up and the haze thickened. I checked out of my hotel that evening because I had an early flight in the morning. My host ordered a taxi so I would have no delays. I would miss breakfast at the hotel but hoped to find something at the airport. Near time for sunset I headed up the slope for one last look at the caldera. 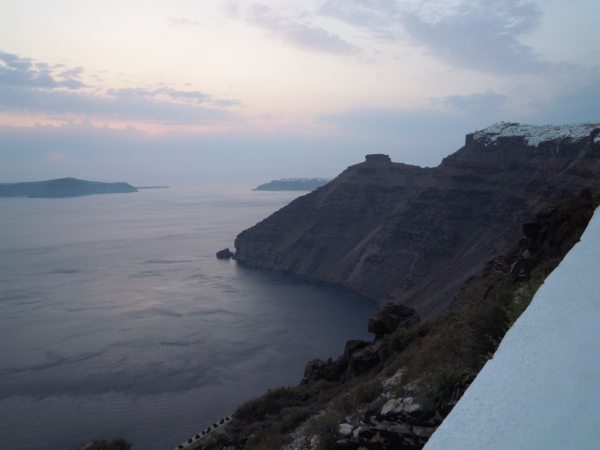 Even with the haze that barred the touch of the sun’s orb on the sea, ruling out a spectacular sunset, I could not deny the softer beauty.

NEXT: A Warrior’s Dream