Going There #9: Shadows in the Stones

Stonehenge impacts. It just does. Despite detractors who want to say this is better, that’s better, you can’t get inside, whatever, there is no other stone circle in the world quite like it. The dressed sarsens with their phenomenal bulk. The horizontal lintels that look as if giants had placed them. The bold position on Britain’s wide Salisbury plain. Power resonates. 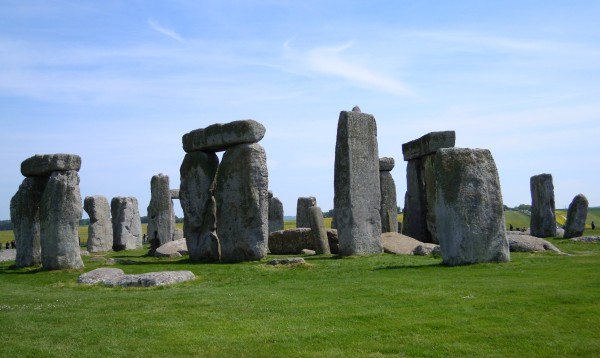 I felt that power as we walked toward the great stones, just as my characters feel it in my stories. Stone circles play a significant role in my second trilogy, which centers in Ireland, and my lead characters have a fascination with this grand megalith so different from their own village circles. Some of the characters have the opportunity to visit. Others envision it.

The site was carved out about 5,000 years ago when people dug a circular ditch. About 500 years later others erected the first stones. Those were the smaller bluestones, a type of stone not found in this area, but which scholars believe were brought all the way from Wales, a herculean task. The quarry has been located and stone cuts matched, pretty strong evidence. But why? No one knows. The giant sarsens came later, and over time the arrangement of the stones saw several changes.

My writer friend Lynn Ash had joined me on my trip the day before our visit to Stonehenge, and we took the obligatory photos. 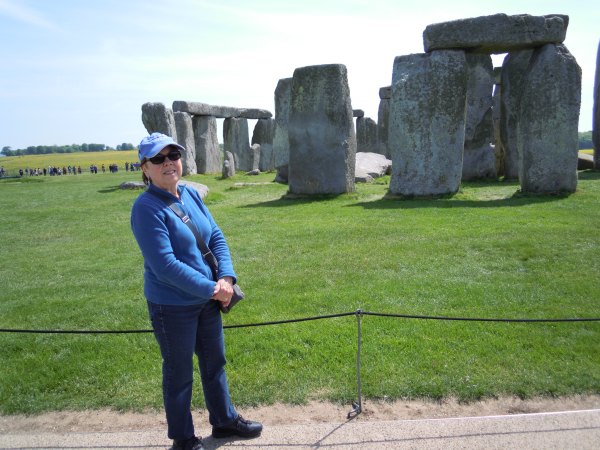 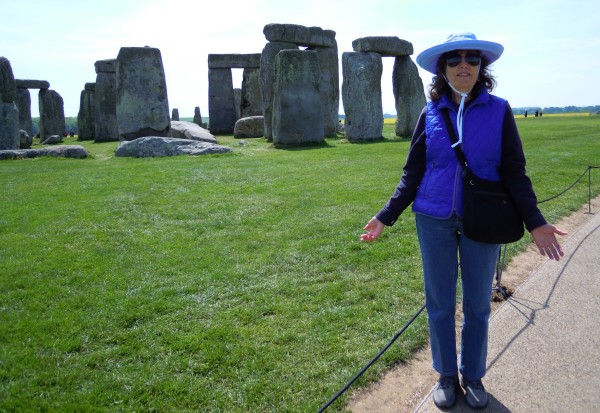 Me at Stonehenge, Photo by Lynn

I first saw Stonehenge in 1993 when I was researching another long-abandoned book. That was before the new Visitor Center. You don’t have to pay to see Stonehenge. It’s right out there on the Salisbury plain, visible from the road and from trails that cross the fields. A fence holds you back a ways. But if you want to get as close as Lynn and I are in these photos and experience the Visitor Center (and it is an experience), you pay. Not a small fee. We each paid about $23 for a set time slot to enter, although you can take as long as you want, once inside the compound.

Compared with the wonderful Almendres Cromlech in Portugal (see “Going There #8”), a site that’s free and wide open to whatever the public and weather may do to it, Stonehenge has become a local industry. Yet somehow that doesn’t diminish the experience–when you give yourself to the wonder. 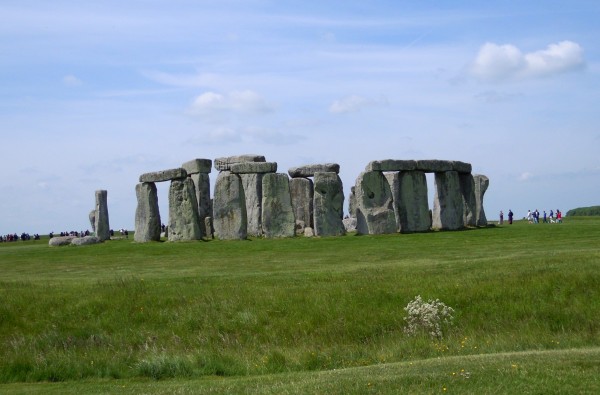 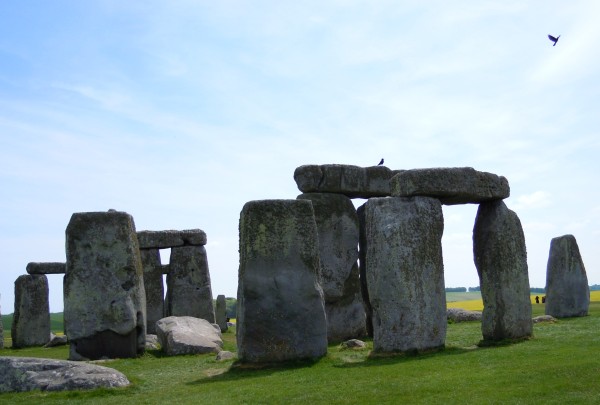 Ravens Among the Rocks

The Visitor Center is remarkably well done. Most intriguing is the 360-degree theater in the round where you stand in the center of the stones while seasons and centuries pass. That makes up a little for the fact that a rope around the real stones keeps you out of the center (except for special occasions, like the summer solstice, when people are allowed in, which you no doubt have to reserve far in advance).

The theater’s effect offers a dramatic experience. Many other fine exhibits explain the site and display archeological finds. Outdoors, typical houses of the early period have been erected, and you can step inside to see where people slept. 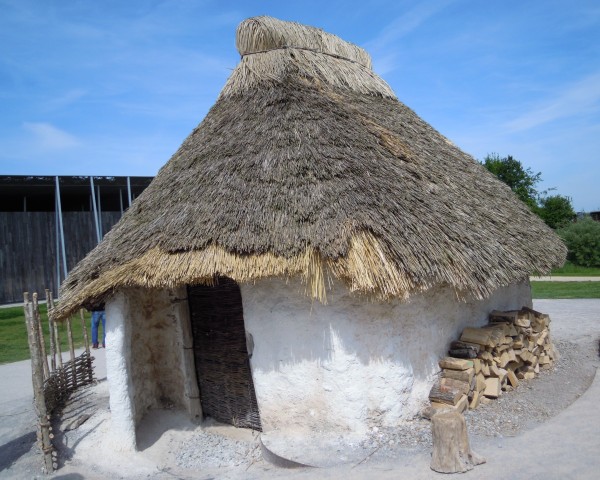 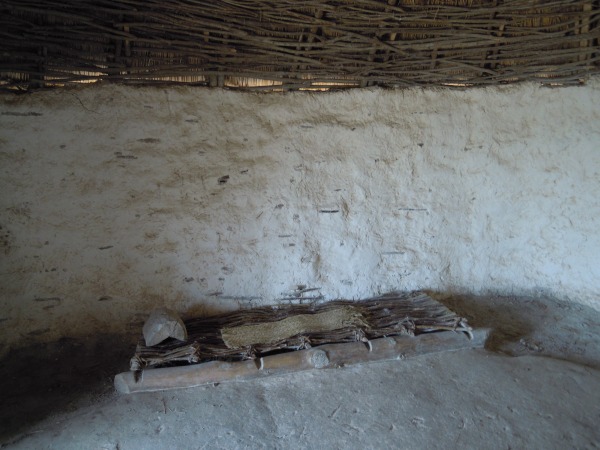 I’m not sure about that pillow. I’m of the flatter pillow school.

A sample stone below shows how the giant sarsens might have been moved to the site in those long-ago days. I had to tap the stone. It’s plastic but illustrates nonetheless. 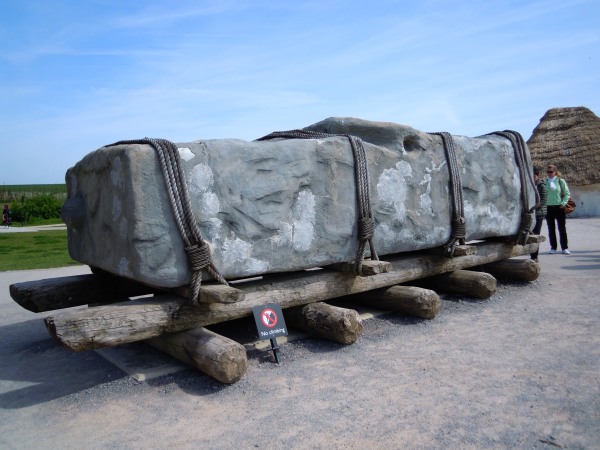 Lynn and I opted to walk to and from the circle. The Visitor Center is a little over a mile away, leaving the circle to stand free and open in its grand position. The day was gorgeous, and the easy stroll allowed us a long view of the stones and the effect of the approach–as my characters would have experienced it. We took the road going to the circle and went back to the center on a trail through the field. A lovely walk.

We had contemplated going to Avebury afterward, another wonderful site where the village is set among giant stones and you can touch them. I had been there before and enjoyed not only the stones, but a lovely high tea in the tearoom of an elegant manor, and I had lured Lynn into this trip promising her “scones among the stones.”

Well, we didn’t have a car, and bus connections would have given us more bus time than tea time. Taxis were expensive there, and we were exhausted. Lynn had taken the grueling trip across the pond just the day before our Stonehenge excursion and hadn’t slept on the flight or very much the night before her departure. I had only flown from Lisbon, but our meeting at London’s Heathrow airport hadn’t exactly been a snap.

Lynn had seemed worried about navigating that huge airport, but I had reassured her that my flight would land about an hour before hers and I could be waiting for her when she came off the plane. We had our iPhones in case it took a moment for us to find each other. The best laid plans and all that. My flight was late, very late. Hers was early. When I rushed into the airport, trying to connect with her, I got no answer. I got delayed in a huge line at border control. While moving slowly through that line I tried email, texts, phone. No response.

Friendly airport personnel helped us–more angels. As soon I got free of border control and found my bag I headed for her terminal–just as she headed for mine. We were striding across moving walkways when we looked up and saw each other. What a relief! We had bus tickets to Amesbury, the small town near Stonehenge, and the bus station was right between the terminals. We made it in plenty of time. But the distress took a toll.

Now we’d spent so long at Stonehenge we gave up on Avebury, but as we sat resting in our room at the delightful Fairlawn Hotel in Amesbury we decided to take an evening stroll to Woodhenge, a satellite site within easy walking distance. We were surely up to a pleasant walk out through the edge of the lovely town. We didn’t account for traffic that buzzed along beside us like freeway traffic on a narrow road, so close to the sidewalk I felt as if a wobble would put me right in a car’s path. But we survived to see this unusual site. A quiet, peaceful place. 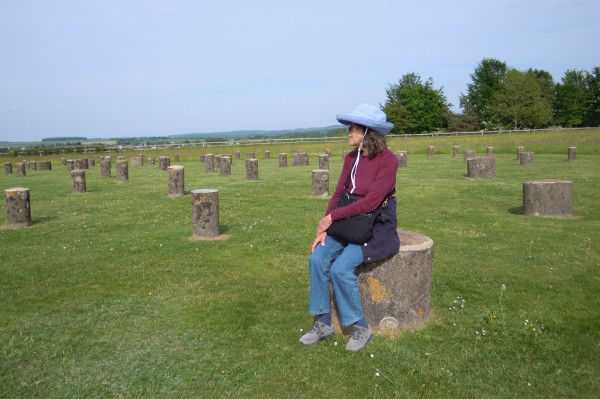 Me at Woodhenge, Photo by Lynn

Lynn snapped my picture sitting on the concrete stumps where wooden poles once rose.

On the way back we took a side path to walk a short way along the famous River Avon. That offered another respite of quiet and peace with a generous touch of beauty. 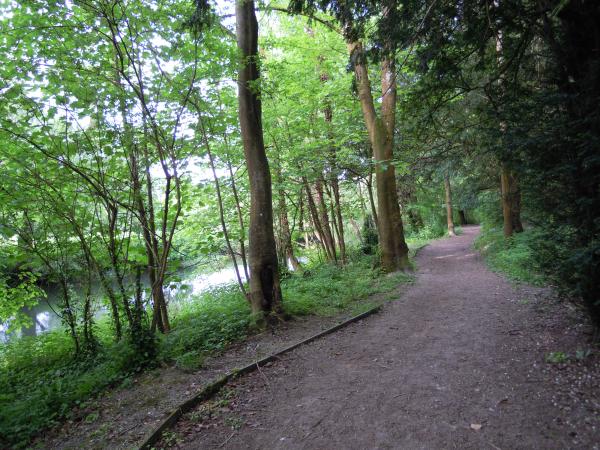 Path Along the River Avon at Amesbury 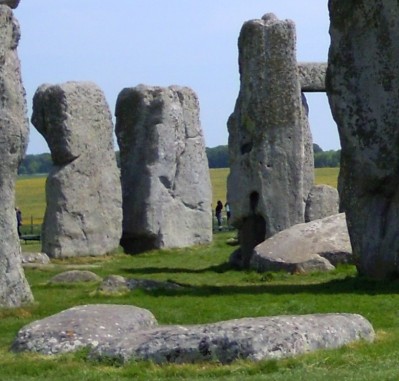 Shadow in the Stones

As I put this post together, selecting photos from the many I took, I noticed something in the photo at the top of the post that I hadn’t noticed before–the picture labeled “Stonehenge.” An odd shadow. I give a closer look here. Do you see it? Probably a strange slant of the light against the stones.

But it put me in mind of the shadows that linger across this old world. Sometimes the shadows seem to come alive where the past remains so visible, as in these ancient works in stone. Or the crumbling citadels of Greece and Portugal, where archeologists work to ferret out the hidden secrets.

Bringing the past to life is what I try to do in my stories–whether from our own country’s pioneer past in A Place of Her Own and The Shifting Winds, or in these ancient times of my new trilogies. I would keep searching, keep reaching, trying to see into the shadows to bring out the light of a people who did walk in these places, portrayed as truly as I can through the fictional characters in their imagined lives.