The village of Cairnryan sits like a hidden jewel on the southwest coast of Scotland. I had never heard of it before I began searching for a crossing to and from Ireland for the traders in my stories. It became a gem discovered. 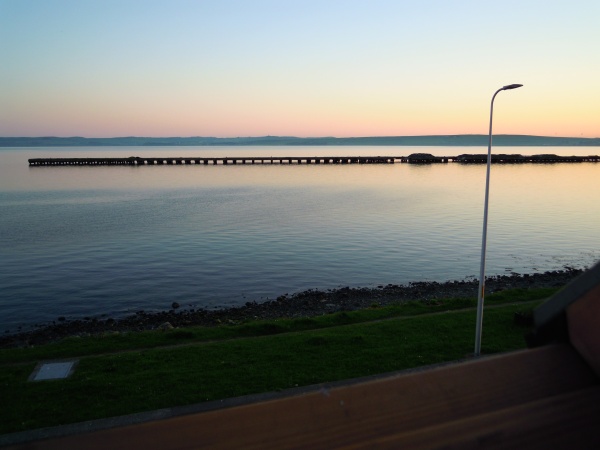 From the Guest House Window at Cairnryan, Scotland

We spent a long time at the window of our guest house that evening, enraptured by the beauty in the fading light at this quiet place.

We hadn’t taken the roads most traveled on this journey. Months earlier when I invited my writer friend Lynn Ash to join me in Amesbury for the last two weeks of my trip, I showed her my itinerary. She found some unfamiliar names on the list, and with a touch of embarrassment I explained that the characters of my books traveled to these places and I needed to see them. Being a fellow writer, she expressed her delight at the unusual destinations. I was glad.

These weren’t tourist spots for me. This was my work.

Stonehenge was familiar of course, and I had chosen it for scenes because of its magnificence and because readers sometimes like to read about popular sites too. I had never heard of the Lake District, although we found it to be a popular retreat for the British.

Once we left the Lake District we ventured into Scotland’s quiet edges, where my protagonist follows a handsome trader into harrowing adventures. The train from Penrith offered a route that got us to the port of Cairnryan where my traders cross–not the straight route my people would take, but the best I found, which brought us to Stranraer, just six miles from The Auld Cairn Guest House we’d booked in Cairnryan. Before we taxied to our guest house we stopped at a pub in Stranraer where I had one of my best fish and chips meals ever, with haddock. Fantastic!

The Auld Cairn was a delightful place. It’s the building in the picture above with the car in front, one of a line of houses that rims the coast. Our host Maggie had lots of stories to tell. We woke to a bright morning. 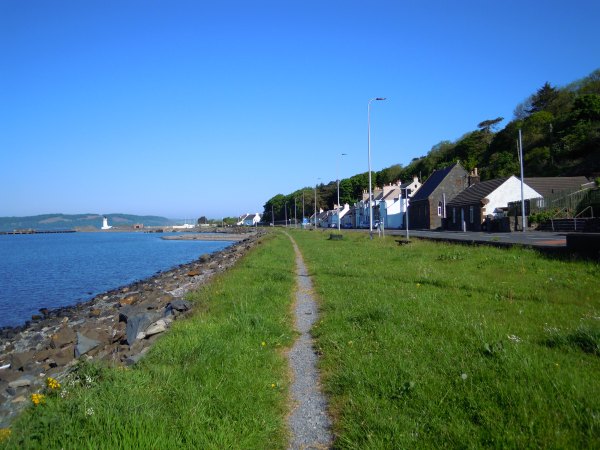 A short walk to the ferry landing and we were on our way to Larne in Northern Ireland.

On the P&O Ferry Leaving Cairnryan for Larne

I wandered around the ferry and finally found a nice spot out of the wind where I could sit on a bench and watch the water go by. Lots of water. I couldn’t help thinking about the ancient travelers plying this water in their little currachs. The currach is a seagoing Irish boat made with a wooden or wickerwork frame covered in animal hides, long and narrow with a high bow to handle the waves (not to be confused with the smaller round coracles used in quiet water). Currachs have been plying the seas in this area for a few thousand years, propelled by oars, maybe sometimes a sail. Some folks still swear by them. I read somewhere that they could travel at about seven knots.

As our ferry sailed smoothly across the water at a good clip, an official-looking fellow came out to the deck where I was sitting. Curious, I asked him how many knots we were going. He shrugged. “I don’t know. I just drive this thing.” He beckoned a young man dressed in orange and asked how fast we were sailing. The guy guessed about 18 knots. Comparing that to the currach’s speed I figured it would take our ancient travelers a good part of a day to make the crossing.

I watched the land fall away on the Scotland side. As soon as it was about to disappear I saw land on the Irish side. So even without instruments our ancient travelers would be able to keep land in sight for the distance, provided the air stayed clear. It had become pretty hazy on our journey and I could still see land. Days were long during the summer when traders made their rounds. According to my iPhone, sunrise that morning was at 4:51 am back in Keswick. Cairnryan is even farther north. With such early sunrises, a start at dawn and strong rowing might even get my traders across the water by the time the sun reached its zenith. Surely they could make it well before dark.

I watched the gently churning sea and shook my head in amazement, glad for the solid ferry. What if a storm rolled in? Even in calm water I had trouble imagining such a ride in a small currach and my appreciation for the fortitude of these early people rose considerably.

Given our long train ride of the day before, Lynn and I planned a shorter journey for this day. After disembarking from the ferry at Larne we took the train–a beautiful ride–from Larne to Carrickfergus in Northern Ireland where we had booked the night’s lodging. We wanted to see the historic Carrickfergus Castle. Even our hotel, The Dobbin’s Inn, has a long history. These places didn’t exist yet at the time of my series but I could still follow the tracks of my characters over the land surrounding them. We toured the castle, just for fun.

This Norman castle was built in 1177 (that’s AD) by John de Courcy and it got besieged many times by a lot of other warriors who wanted it. Lynn and I bought tickets and explored inside. 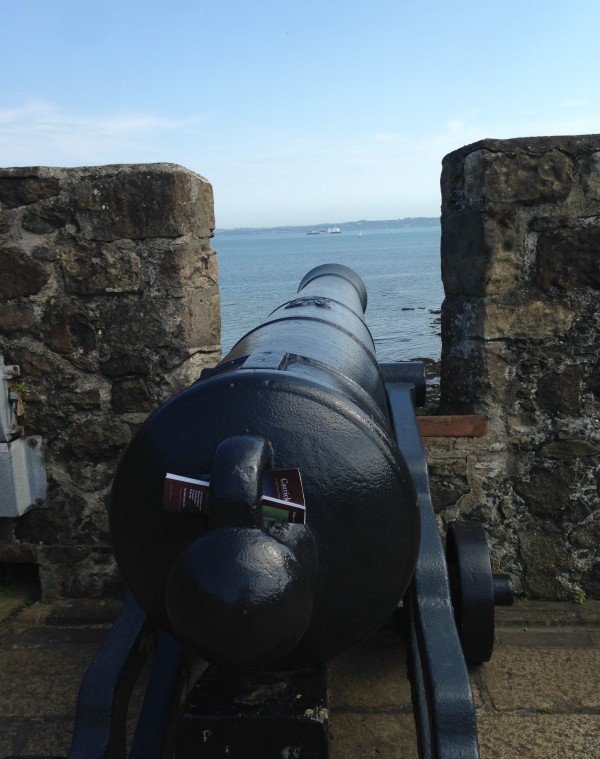 I got a bead on that ferry. I think he should be worried. Or not. I believe my weapon is spiked.

Although these structures are modern compared to the stone monuments of my books, when we checked into our hotel I wasn’t prepared for the answers our desk clerk gave when Lynn asked him how old the hotel was.

With complete nonchalance he told us there had been a hotel there for 800, maybe 900 years. They were at that moment digging into the walls to learn how much of the early building still existed. Once we had absorbed that surprising answer, he casually pointed to the large old fireplace in the lobby and said, “That’s Elizabethan.”

I think my jaw dropped.

He didn’t mention the inn’s rumored ghost and I didn’t bring it up.

That night after an exquisite dinner of salmon with hollandaise sauce in the inn’s restaurant we went upstairs and settled in for a good night’s rest.

Reaching out, I shut the bathroom door and walked back to my bed without a sound. I didn’t hear the slightest squeak. Back in bed I pulled the covers up to my chin. I never heard another squeak all night.

NEXT: Heart of an Irish Story