Going There #12: Heart of an Irish Story

If my visit to Knossos in Crete felt like being home because of all the days I lived there in my mind while working on my first story in the ancient series, my return to Ireland felt like returning to another home of the mind. Ireland becomes significant to the Cretans as they seek another place of peace in the world.

Land of my Story’s Clan

The last time I traveled to Ireland I stayed a month there with my late friend Tilly Engholm. She and I spent six days on the island’s south coast at the small town of Rosscarbery, the central location for the Irish/Éireann characters in the series. The fictional village of my Golden Eagle Clan sets just below the stone circle now called Bohonagh Circle, an easy walk from the Rosalithir B&B where we stayed. This wonderful B&B hosted by Catherine and Finbarr O’Sullivan is one of the friendliest places I’ve visited in all my many travels.

Of course I had to return and wanted to introduce my writer friend Lynn Ash who was traveling with me on this part of my current trip.

Since the last visit to Ireland when I was researching what became the series’ Book Four that takes the reader there I had drafted Books Five and Six as well, which took my characters to places I’d never seen. The treks through Portugal and the UK gave me a good look at many of those, but I also had a few new scenes in Ireland in places I hadn’t been.

Before traveling to Rosscarbery I wanted to spend a little time at a location closer to the new settings and chose the historic village of Adare near Limerick.

It’s a charming place with thatch-roofed cottages and a crumbling castle, a lovely river walk, and entertainment by a terrific young Irish musician.

The tourists have found it, but we got a quiet B&B on the outer edge, with a country setting and lovely breakfasts, the Carrigane House. 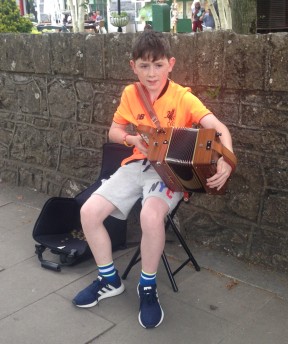 We stayed three nights to explore the area. I found my beautiful green fields for a big battle scene and the treacherous ford across the River Shannon at Limerick.

(I later found reference in a blog post by Irish waterway historian Brian Goggin that there was likely a more passable ford across the River Shannon about ten miles north of Limerick near O’Briensbridge. He kindly responded to my email to confirm there was probably an ancient ford just below the bridge. Brian had helped me before with information on the River Barrow which figured in scenes for Book Four.)

On one of the three days at Adare I used my bus pass to ramble down to Kilrush on the Shannon and check out another scene, enjoying a stroll to the marina and a tasty salmon lunch at Crotty’s Pub.

We found pub food to be reasonable and delicious. In Adare we had to have at least one meal at the famous Blue Door with its fine thatched roof.

From Adare we took the bus to Rosscarbery with a bus stop at Cork City where we watched the beautiful island clouds rise over this intriguing city.

Catherine at the Rosalithir B&B welcomed us with open arms as I knew she would. The B&B is on a working farm just outside Rosscarbery. They raise fine purebred beef cattle now, having switched from the dairy cattle they had on my last visit. Lynn and I booked only two nights with them, one full day. It wasn’t nearly enough, but we would do what we could.

From the upstairs deck of the house we looked out over the yard to the surrounding farms. Haze screened our view of the sea in the gap. Note the old stone fence on the far side of the road.

Anxious to see the stone circle so central to my stories, I headed out with Lynn in the morning. Catherine told us about a walk to the circle I hadn’t taken before–a lovely hill walk over green patchwork fields with views back to the B&B and forward to the ocean. If you can zoom the first photo below you may see the B&B. It’s a pale-pink building with two facing gables in the middle of a wide field in the upper right. 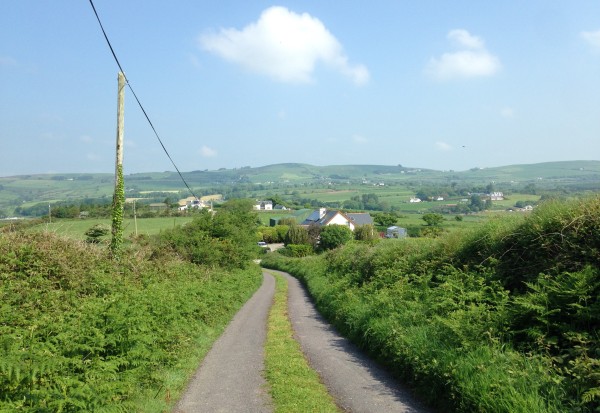 Looking Ahead to the Ocean

My heart pounded as I climbed straight up the slope to Bohonagh Circle–called Golden Eagle Circle by the Éireann characters in the series.

The Climb to Golden Eagle Circle

After the huge rings of Almendres Cromlech in Portugal and Castlerigg in England this circle looked small. Bracken and brambles had filled the interior since I last strolled through.

Bluebells lifted their heads above the competition. I remembered those exquisite flowers blooming among the stones from my visit before. 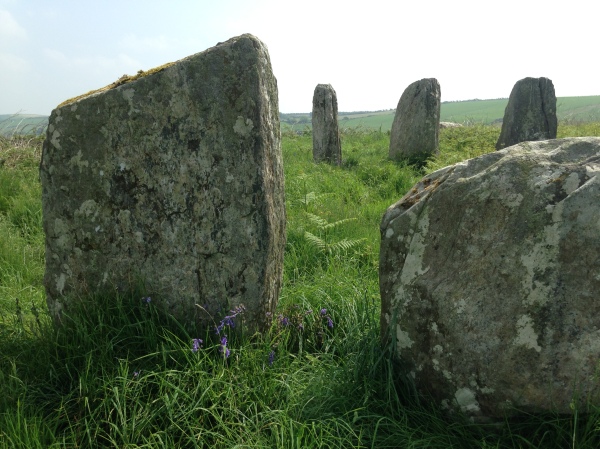 Bluebells Among the Standing Stones

I got down on my hands and knees to climb under the electric wire surrounding the space and made my way into the ring despite the tall growth. I took my time, circling the ring to consider each stone. I remembered the rough faces, the cool edges, the warm, the tall pillars with tops beyond my reach, the low, the wide entrance between portal stones I could barely touch at once with my outstretched arms, the slanted tops, the rounded, fat, slim, one slant that matched the slant of the sea gap beyond. Echoes shimmered. Dancing feet pummeling the ground. Voices of pleasure, pain, supplication. Though left to the wildness of winds and other natural forces the circle still seemed to resonate with a subtle power–maybe more so because of the untamed elements.

Here lay the heart of my Irish stories.

We would visit the better known Drombeg Circle with Catherine. Close to the highway, that one is a National Monument, well maintained by the Commissioners of Public Works for the state.

Catherine and Me, Photo by Lynn

A sign at the site notes that on the winter solstice the sun sets at a point aligned with the center between the portal stones and the middle of the recumbent stone opposite. In my story this is the village circle of my neighboring Red Deer Village. The circle rests on a bench of land overlooking the broad fields below, the sea lost again in the distant haze. In one of my books the clanspeople of southern Éire face the warriors of Zambujal on those broad fields, and in another a young Red Deer woman faces the wrath of her father. Many scenes there.

Drombeg Circle, My Circle of the Red Deer Clan

We closed our day with a visit to the sea in the softening light. I wanted to revisit Golden Eagle Bay. We drove to the wrong bay first, then found the right one. I hadn’t remembered the shoreline quite right, so the stop helped me form a better sense of place in this important setting. Anguished partings happen here. And poignant reunions.

The wash of the sea brought many memories, like recurring waves. 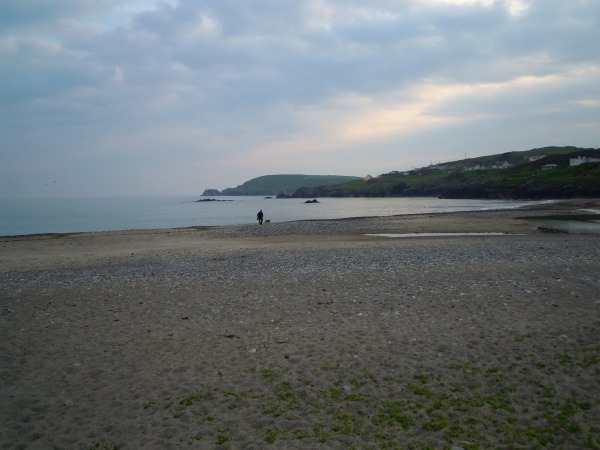 With one last look at this bay below the site of my Golden Eagle Clan village I embraced the scene, feeling enriched by this and so many experiences over the course of my journey. I would hold these places in my mind and heart, hoping to share and let others see and feel the wonder of it all.