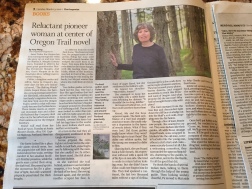 “Janet Fisher has Oregon history running through her veins: She grew up on and now runs the Martha A. Maupin Century Farm, founded in 1868 by her great-great grandmother Martha Poindexter Maupin,” writes Amy Wang of The Oregonian in a feature that ran in the Sunday A&E Section and also in OregonLive online.

“Fisher, a longtime writer and editor, turns to Oregon’s pioneer days for her new historical novel, ‘The Shifting Winds,’ (Globe Pequot Press),” Wang adds. Then Wang includes an excerpt from the book. A lovely spread.

On a ridge overlooking the Umpqua River a few miles south of here, Janet Fisher built a house on the same farm her great-great-grandmother, Martha Poindexter Maupin, had bought for herself and her children 140 years before.

The two women had more in common than Fisher realized until she embarked on a quest to learn who her ancestor really was. The search introduced her to a rich family history she never knew existed and yielded a book, “A Place of Her Own,” a title that applies equally to both women.

“For more than two years, I walked in Martha’s shoes, saw the world through her eyes and lived her life,” Fisher said. “All the historical material that I found, and the research that other relatives had done, gave me a basic skeleton to work with.

“My job was to fill in the gaps and re-create Martha’s story.”

A STORY OF COURAGE AND PERSEVERANCE

The leap into the unknown – with its silent, unseen jagged edges – is an act we’ve all undertaken.

If you are young – say, 15 years old – it all may be about the adventure, with relatively few worries of the perils ahead. But what if you’ve taken many such leaps, arriving at one junction after another, each one with more at stake than the last? What if, too, you’re aware of the dimensions of the jagged edges that dot the landscape, but you have to press on – to grow and prosper – or risk killing the wanderlust spirit inside you?

Fisher, who is Martha Maupin’s great-great-granddaughter, also has written other historical novels. She grew up on the family farm along the Umpqua River in north Douglas County, the same one that Martha bought 150 years ago after Garrett, her husband, died drunk in a wagon accident in 1866.

She writes Martha’s story as fictional history and tells Martha’s story (and that of her husband Garrett) with care and meticulous detail, the latter owing to miles travelled and volumes of documents read from Illinois to Missouri to Oregon, all of which the author chronicles in her writing journey during the four interludes in the book.

At the start, Martha is a spunky 15-year-old kid who feels constrained in the family home and yearns for freedom. By book’s end, she is a concentrated, learned woman who has seen the world’s nurture and its base nature, and she understands how to navigate each. The farm, and its house, is a testament to Martha’s wandering spirit and the lessons learned, yes, but it also is an anchor she now craves after Garrett dies.

“I had to do something. I never wanted my family to live off the charity of friends and relatives. But I think the most terrible thing for me was knowing I had to decide … I had to come to it myself, say, ‘Here I will stay. Here I will take my stand’ … It was the most lonely choice I ever made.”

It was a daring decision on many levels. On a practical note Martha had to secure a loan, but as a widow — and a woman — she needed her oldest son, Cap, to arrange it. She signed for it ($1,000) but only because Cap was too young to sign the documents. Women’s rights did not exist. They couldn’t even vote. Women (and children) were the property of men, a fact that had hit home for Martha years earlier. There also was the sheer volume of work to clean up the land and build the dream frame house with a balcony. . . .

WRITER FINDS HERSELF IN THE PAST

The former writing instructor . . . discovered many common threads between her life and Martha’s. The more she uncovered, the more Fisher began to identify with her great-great-grandmother. 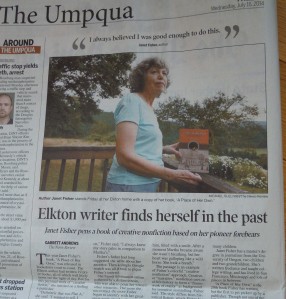 Martha Ann Poindexter was born in 1829 in Kentucky. Martha’s life changed considerably when Garrett Maupin rode into it.

Bolstering [Fisher’s] inventive prose are “reams” of primary source material Fisher uncovered, including a 75-page manuscript by one of Martha’s granddaughters.

Throughout the book Fisher puts her characters and scenes in historical context. She writes about the Maupins’ turbulent marriage with a background of changing gender politics during the Civil War era. She puts Garrett’s Southern sympathies in the context of a North South divide that split the whole country, even Oregon.

Martha Poindexter Maupin came across the Oregon Trail in 1850. Two years after the death of her husband in 1866, she bought  land near the present-day town of Kellogg, about an hour southwest of Eugene, Oregon. Today her great-great-granddaughter Janet Fisher lives on the farm. A Place of Her Own is not only Martha’s story but the story of Janet’s journey of discovery as she unearths the history of her family’s land.

It is not always a heart-warming story. Martha married against her parents’ wishes. Her husband, Garrett, drank too much and abused his family. Fisher sensitively explores the mix of emotions that must have washed over Martha following Garrett’s accidental death, while touching briefly on struggles from her own personal life that inevitably surfaced in the course of such an undertaking.

Ultimately, it is a story of strength and courage, as Martha overcomes the many hardships inherent to the times in which she lived and the roads she chose.

Janet’s account of Martha’s life is written in novel form from Martha’s point of view. It is interspersed with “Interludes” from Janet that relate some of the logistical challenges of genealogical research, joyful moments of discovery, her yearning to connect with her great-great-grandmother, and the emotional challenges of traversing Martha’s darkest moments. Historical purists might quibble with Janet’s reconstruction of scenes, conversations, and feelings. But the end product not only represents a very readable tale, it embodies Janet’s aim to “find” the woman to whom she is linked not only by genealogy but by ownership of the land as a single woman.

MORE PRAISE FOR A PLACE OF HER OWN

Janet Fisher is such a good writer and brings Martha, her family, and her times so vividly to life!
—Riane Eisler, New York Times bestselling author of The Chalice and the Blade

Janet Fisher has a compelling story to tell about her land and its history . . . a riveting tale . . . going back to her great-great-grandmother Martha Ann Poindexter Maupin. . . . The two women share an almost mythical bond forged not only by the land, but also by Martha’s remarkable life . . .
—Kathy Westra, Woodland magazine

When Janet Fisher writes a scene, you are there. Whether she takes you across a raging river or through the majestic fir trees on Martha’s land, you live the moment.
—P.E.O. Chapter CU, Oregon Book Club